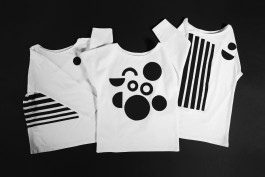 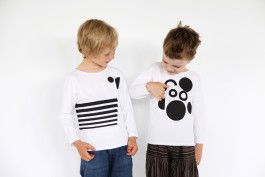 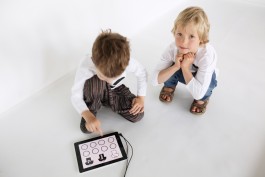 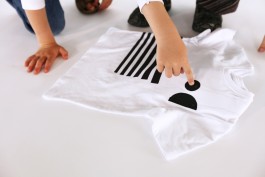 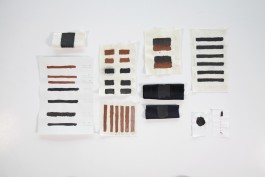 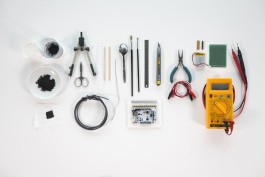 Addressing the topic of interactive wearable textiles, project JOHN PAUL GEORGE & ME is a collection of wearable musical instruments for kids. Each T-shirt represents a specific instrument and all together form a rock ensemble. Through the seemingly “magical“ clothes that produce sound by touch, the project brings to children an interactive musical game, encouraging and stimulating their musical interest as well as their collaboration with each other to perform music.

The project is a collection of T-shirts, inspired by and designed after the standard rock trio, that includes guitar, bass and drums. Each shirt has a distinct pattern, based on the attributes of the instrument it represents. The patterns were silk-screen printed, on plain T-shirts, with conductive paint. This electrically conductive paint is a flexible, washable textile chemical mixture which is non-toxic and water soluble. Each shape forms a uniform conductive space, sensitive to touch.

A microcontroller attached in a removable pocket in the back of each garment, is connected to the shapes with conductive thread and senses the touches. The signals produced, are in turn sent to a mobile application via Bluetooth LE (Low Energy). The application itself is multi-platform and runs on both Android and iOS devices. Its purpose is to receive the touch signals wirelessly and playback sound in real-time. Multiple T-shirts can be connected to a single mobile device, or each band member can use their own. The device can be connected with headphones and external speakers to amplify the sound output.

Project JOHN PAUL GEORGE & ME is proposing an interactive implementation of smart materials and new wearable technologies. Furthermore it is an approach of transporting the idea of activated material and animated textiles.